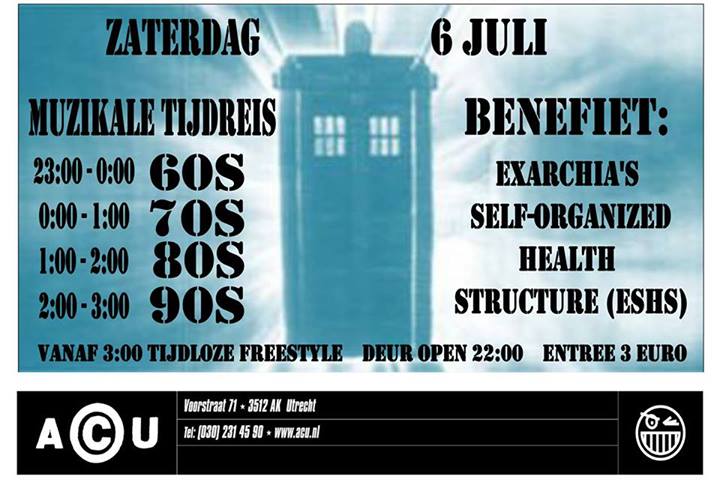 This weekend benefit party for Exarchia’s Self-organized Health Structure (ESHS) at ACU.
The party will be a trip through time from the 60’s until now.
Event

Exarchia’s Self-organized Health Structure (ESHS)
ESHS consist a self-organized attempt for communal primary health care, which is supported as structure and consisted by doctors, psychiatrists, pharmacists, nurses and local inhabitants.
As a social attempt is open to any scientist from the health care field, who would like to offer his services, for free, to society without making any exception and accept direct-democratic procedures as operating framework.

On one hand we clarify that our goal is not to substitute the present health care system that is collapsing anyway and on the other hand we declare categorimaticaly that we don’t offer any kind’s charity. We consider the political and economical situation as an emergency and a struggle against society. Due to that, we chose to participate in this war for social emancipation by standing on weeks’ and fighting people’s side.

Operating keystone:
The SHS has rebellious and anti-statute character and is defined by its anti-hierarchical operating way, the equal participation and the direct-democratically process followed for taking any decision.

The SHS as an attempt doesn’t cooperate with governmental institutions, state and private military and security forces and Non Governmental Organizations, or does not consist part of any political party.

Its actions have not, in any way, charity character or urban humanism ( f.e Red Cross) but theirs social direct actions are included in the struggle for social liberation.

We do not just offer pharmaceutical or medical care and psychological help to the poor and outcasts but we try to cooperate with them for a general emancipation that concerns all of us. Basic goal and view for all the people that take part is a reciprocally and non selfish solidarity, based on the conception that we are all potential immigrants, homeless, unemployed without access to health care.

For this reason we support without any hesitation, every social attempt that its goal is the creation of a society , where everyone without any exclusion could have access to work, health care, housing, education and culture.

Because of the above, we took the decision to cooperate in order to regain our lifes and dignity.